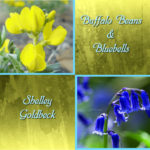 Many people complain about the price of meat but they have absolutely no idea the work and sacrifice that goes into putting that steak on the plate. I’ve tried to capture the feeling in this poem about my own experience helping with chores.

A sister came home one February after years of being away.
The farming sister’s happy, someone to help with chores today.
Skidoo suit over layers, extra socks, mitts over gloves. It’s 30 below.
Bundled right up, they jump in the truck, to do chores, away they go.

Thank God for the tractor cab that shelters from the wind.
The heater doesn’t work, but she’s warm jumping out and in,
Opening gates and closing gates as they feed each small herd.
City sister does what she’s told and never utters a word.

Her job is to cut the twine from all the bales so round
While country sister goes and brings another bale down.
But handling the knife wearing all those gloves and mitts
Is next to impossible so brrrrrrr, bare handed it is!

She thought it would be simple but the twine is very tight.
Her sister told her how to do it but she just can’t get it right.
She’s tangled up, string everywhere and now here comes the tractor!
And darn it’s cold, it’d be so easy if it weren’t for the windchill factor!

Hour after hour, bale after bale is set out for all the cows
And city sister thinks to herself, “can we go in the house now?”
“Let’s move these heifers to that pen, we’ll do it while you’re here.
Isn’t it nice to have your help? Been so many years.”

Despite the many layers, city sister’s chilled to the bone.
She’s not the type to whine but inside she’s one big groan!
“I think we’ve done all we need”, country sister finally declares.
And city sister contains her joy; she’s endured all she can bear.

In the porch it takes some time as all their layers they shed
And country girl laughs right out loud at what the city girl said:
“After seeing what you do each day, a job I know you love.
Whatever it is we pay for meat, it’s simply Not Enough!”